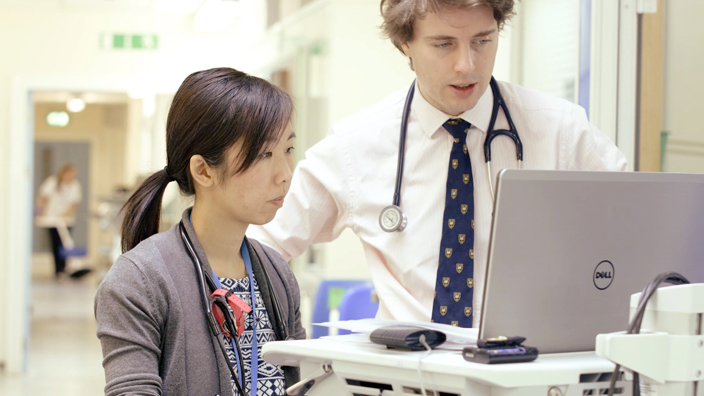 Due to the high volume of patients and increased demand on clinical staff members, Imperial’s leadership team sought a solution to reduce documentation time for vital signs, as well as providing visible near real-time National Early Warning Scores (NEWS) to release time and boost responsiveness. What they found using Cerner CareAware VitalsLink® and CareAware iBus® for Bedside Medical Device Integration (BMDI) was a 53.5 percent reduction in the time it takes providers to document a full set of NEWS — respiratory rate, oxygen saturations, temperature, systolic blood pressure, pulse rate and level of consciousness.

“It’s had a real impact on handovers. We can have a list of our patients up on the screen, and we can go around and individually look at the NEWS scores so there’s no miscommunication,” said Katie Pritchard, ward manager at Imperial’s Albert Ward.

These efforts began with a sample group of 10 percent of ward estates that make up 50 percent of all Imperial devices. Pre-implementation, it took two minutes and 35 seconds to record. Since the VitalsLink and bedside devices went live in September 2015, it took an average of just one minute and 12 seconds as of October 2016.

Additionally, automating the calculation of NEWS removes the risk of transmission error that comes with using human transcription. This increases accuracy and triggers alerts if measurements are outside normal ranges — translating to more proactive patient care.

“We have a new opportunity with the digital agenda to do things differently, to do things smarter — sometimes faster, but hopefully more efficiently — that will improve both the working life of clinical staff and the care we give to patients,” said Bolger. “Patients really are what we’re here for first and foremost.”

1 Time savings were calculated using a manual time study across seven wards during a four-day span that resulted in 83 seconds saved per set of observations. These time savings were then extrapolated across 17 wards, including two BMDI areas, from March 2016 through June 2017.