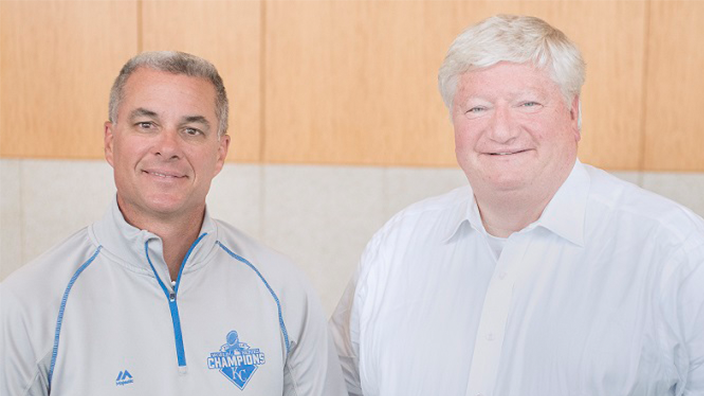 Royals General Manager and Senior Vice President of Baseball Operations Dayton Moore is in his 10th season with the Kansas City Royals*. From Day 1, the goal Dayton set out to accomplish was bringing a Baseball World Series championship back to Kansas City, a dream brought to fruition in 2015 when the Royals bested the New York Mets in five games to win the franchise’s first World Series championship in 30 years.

Cerner Co-Founder and Vice Chairman of the Board Cliff Illig sat down with Dayton to find out how culture, a focus on vision and a plan led to the Royals’ dramatic turnaround.

CLIFF: In your book, More Than a Season: Building a Championship Culture, you have said that culture grows from the ground up, but leaders shape the culture. You’ve worked with a lot of leaders – what traits do you look for in a successful leader?

DAYTON: Whenever we look at hiring leaders, we ask a few key questions that tell us whether a leader will be a good fit for our team.

CLIFF: You have created this legendary culture across a team with incredibly diverse backgrounds, languages and life experiences. What were your building blocks to create this culture?

DAYTON: It’s easy to show up every single day and have passion for the sport you love. But to me, it goes back to the simple word of “care”. You have to care deeply about your organisation, your company. And you have to come to work every day and want to work harder for something that’s much bigger than yourself.

I believe we will always produce players in our minor league system, not because our evaluators are better than anybody else – everybody can evaluate talent – but because we have people in place that understand the importance of character, and they care for the players. They build the kind of organisation we would want our own sons and our own families to be a part of. Coaches, instructors and managers have to be encouragers, they have to be great teachers, and they have to care. They have to look at the player as if he is their own son.

Our leadership team agreed on a model of “Organisational Harmony”, where we hold ourselves accountable across several areas.

DAYTON: Well, I’ve got to lead myself well. I have to be the one setting the example. I believe my job is to continue to try to give power away. If you don’t take it and run with it, I will take it back, quickly, because I care so much about the Royals and what we are trying to do. To me, it’s as simple as making sure you’ve got good people around you that care as much as you do about your processes and about getting it right. I don’t care who gets the credit, I just want to get it right at the end of the day.

With us, the players are the ones that are ultimately guiding your success. They have to go out and perform. And our scouts have to choose the right players – not just the most talented players, but the players who have their hearts in the right place. I tell them to look at a player’s playmates, playgrounds and play things. These three factors tell you a lot about a person. Who do they surround themselves with? What are the things the player pursues off the field? Ultimately, these factors determine a player’s success on and off the field.

CLIFF: After winning the World Series, were you at all concerned that your success would kill part of this culture?

DAYTON: That was a concern, and it was a concern the previous year, too, after coming so close. Our players were experiencing something for the very first time, and everyone wanted to talk about it. They had a shorter rest period than usual, and they needed the same strong work ethic and processes and preparedness in the offseason to be successful. In professional athletics, if you are off by this much, you’ll lose. So we talked about warning signs that we needed to look for, and what to do when we see them – we needed to have the courage to confront them.

And what are the warning signs? They’re hidden in the player’s daily routine. Men don’t decide your success – your daily routines do.

CLIFF: Inside your team, you have players from many different countries who speak many different languages. How do you manage this and create a cohesive team?

DAYTON: That’s a great question, and it goes back to our leadership. Our leaders need to want to learn about different cultures. For instance, one thing we do is to celebrate the history of the Latin player and their significance in baseball. One of the ways we do this is having a Latin American night during spring training, when we bring in foods from all different parts of Latin America. The most important piece is to have leaders who embrace, celebrate and recognize the diversity of their team.

CLIFF: Baseball is a sport of statistics. How do you balance all of the data points you receive in order to make decisions?

DAYTON: The clubhouse is a living, breathing organism. I like our analytical guys a great deal. They have taught me a lot and are a huge part of our success. But they often tell me that the numbers say to do this, and the numbers say to do that. One day, they recommend one player, and two days later, they recommend another player. But again, the clubhouse is a living, breathing organism. It has its own chemistry. There are 162 games and you have to show up every day. It’s volatile, and it’s fragile. Data needs to inform your decisions, but you have to keep the culture of the organisation at the forefront.

* The Kansas City Royals are an American professional baseball team based in Kansas City, Missouri, USA.