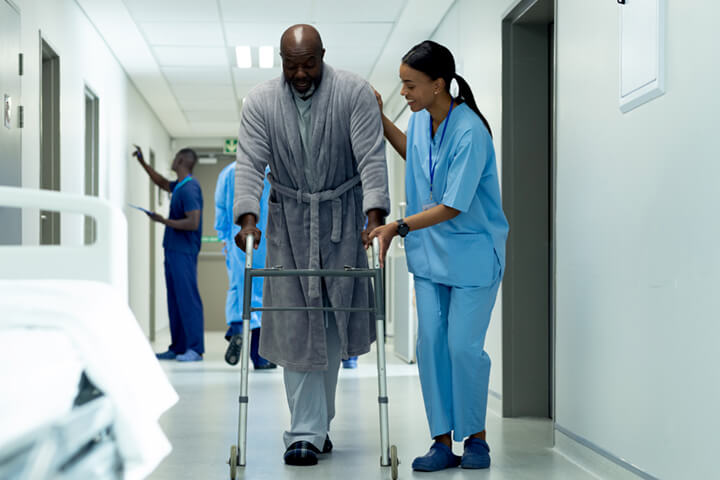 The borough of Lewisham in southeast London has been looking at ways to manage its elective backlog, using data intelligence to help prioritise and drive focus. The area is culturally diverse and has significant areas of deprivation. The number of people on NHS waiting lists in England is now at roughly 5.5 million unique patients, which equates to approximately 10% of the country’s population1. Not all of these are waiting for elective procedures – some are waiting for an outpatient consultation or diagnostic tests – but the fact remains that there is significant pressure on the system as patient numbers continue to grow.

The NHS has outlined a core set of targets,2  which are summarised in the graphic below. Alongside these targets is the reality of health inequalities – people living in disadvantaged areas of the country already experience poorer health outcomes,3  with statistics showing that those living in deprived areas are 1.8 times more likely to wait over a year for treatment.

With this in mind, Lewisham and Greenwich NHS Trust set out to determine what they could do to ensure that all residents were getting access to equitable care. Using the Elective Recovery analytics dashboard, a team led by Dr Elizabeth Aitken, chief medical officer and consultant geriatrician, were able to see that many patients were being cancelled for surgery at short notice or were coming in for surgery but not being deemed fit for the procedure to go ahead. As Dr Aitken says, “We are fortunate in the Lewisham borough to have the Oracle Health’s HealtheIntent® platform, which brings together primary, secondary, community, mental health, and adult social care data – this provides almost real-time population health and patient level data that can be interrogated.”

Using the integrated dataset, the team were able to look at core elements of those on the waiting list to help prioritise interventions. They were able to review ‘long waiters’ to understand if patients are deteriorating while they are on the waiting list and also to identify patients who appear on more than one waiting list to ascertain whether there are opportunities to streamline care. Whilst reviewing this information, the team were also able to highlight any inequalities by age, ethnicity, deprivation, or gender. This initial analysis helped to identify the patient cohorts that could benefit most from targeted intervention and support:

Using the electronic frailty index (eFI) built into the platform as an indicator, they were able to identify those who may be at a greater risk of adverse outcomes as a result of their underlying vulnerability.

An initial clinical review of patients waiting for 52 weeks and identified as frail from the eFI was carried out by the lead geriatrician who found that 23% of people had had their surgery cancelled or their procedure changed as a result of being ‘unfit’. A further 27% of the cohort were likely clinically unfit and 42% of these had experienced an emergency admission or attendance in the previous six months.

For those with at least one emergency admission in the preceding six months:

This initial clinical review helped the team to determine the optimal cohort for effective intervention: frail patients who had had an attendance within the past six months (whether in the emergency department, or as an inpatient). This offered a consistent indicator of whether they may be unfit for surgery or would require late cancellation, which in itself is an inefficient use of already scarce resources. The team further focused on the Trauma and Orthopaedics (T&O) pathway as this was one of the specialties with the greatest reduction in new pathways since 2019.

The process for case review involves a weekly clinical panel discussion to determine the best course of action. The panel consists of a geriatrician, an anaesthetist, a surgeon, the waiting list manager, and a primary care representative, who discuss the case and decide whether the patient can go straight to surgery or whether they need to go into pre-op assessment. For more complex cases, patients are brought into the multidisciplinary optimisation clinic, where they will see a geriatrician, occupational therapist, and physiotherapist with the goal of optimising them over time to ensure they are fit for surgery.

The clinic also provides an opportunity for shared decision-making and discussion with the patients and their carers about whether this is the right surgery and/or the right treatment for the individuals.

Sometimes, it may be determined when reviewing the notes that this type of surgery just isn't practical anymore, e.g. a patient waiting for a hip replacement is now bedbound or has significant pressure ulcers.

As Dr Aitken explains, the team also review a large number of people with uncontrolled diabetes who are not fit for surgery. Previously, these people would have been referred back to primary care, hopefully for optimisation, and then they would be referred back to the waiting lists six, 12 or even 18 months later. Now, with primary care integrated as part of the clinical panel, those people are referred directly to the community diabetes clinic where they will be seen within one week. Dr Aitken says, “They are then offered a three-month follow up in the hope that their diabetes will have been optimised – this supports equity on the waiting list, so these patients aren't being compromised.”

Through the clinical panel review process, the team has found that 14% of patients have not gone on to have surgery, which has not only released capacity in the system, but has also been the right decision for those individuals.

Dr Aitken goes on to say, “This dashboard is available to anyone in Lewisham who wants to see where the inequalities are and we even have some of our surgeons now looking at this, which is really good.”

Dr Aitken acknowledges that while this work has only focused on a small area to date and is based on a snapshot in time, it is still extremely scalable. This initial work focused on the ‘very long waiters’ and the team recognise that the outcomes are likely to be less if patients were reviewed now, given the reduction in the patient tracking list.

The programme is already expanding the workforce and increasing capacity to be able to focus on additional specialties. She says, “I would like to drill down further, focus on the demographics and understand the deprivation index to make sure we really are reaching the right patients.”

The next steps will be to understand how this population-level health data can be used to inform the preassessment work. There is a large volume of people who are still on the waiting list and the goal would be to identify those who would be eligible to have a virtual appointment and complete their own self-assessment rather than coming through the system, which will speed up the overall pathway.

The tip of the iceberg

Dr Aitken summarises this work and outlines the future potential: “We've used population health data to identify and streamline the patients that we need to bring in, but the data is so rich that there are so many more potential uses – this is the very tip of the iceberg in terms of opportunities that are available to us.”